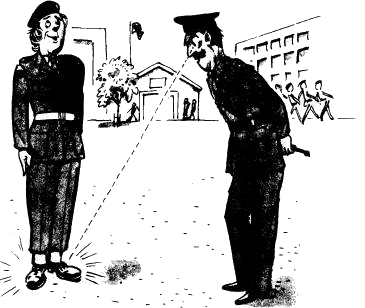 Fred was a young soldier in a big camp. During the week they always worked very hard, but it was Saturday, and all the young soldiers were free, so their officer said to them, 'You can go into the town this afternoon, but first I'm going to inspect you.


Fred came to the officer, and the officer said to him, "Your hair's very long. Go to the barber and then come back to me again."
Fred ran to the barber's shop, but it was closed because it was Saturday. Fred was very sad for a few minutes, but then he smiled and went back to the officer.
"Are my boots clean now, sir?" he asked.
The officer did not look at Fred's hair. He looked at his boots and said, "Yes, they're much better now. You can go out. And next week, first clean your boots, and then come to me!"

A) Which of these sentences are true (T) and which are faIse (F)? Write T or F.