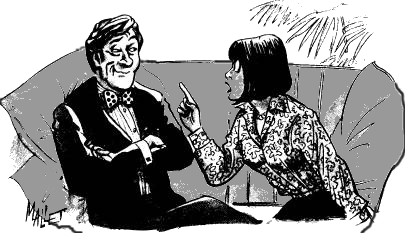 Mr and Mrs Yates had one daughter. Her name was Carol, and she was nineteen years old. Carol lived with her parents and worked in an office. She had some friends, but she did not like any of the boys very much.
Then she met a very nice young man. His name was George Watts, and he worked in a bank near her office. They went out together quite a lot, and he came to Carol's parents' house twice, and then last week Carol went to her father and said, “I'm going to marry George Watts, Daddy. He was here yester­day.”
“Oh, yes,” her father said. “He's a nice boy-but has he got any money?”
“Oh, men! All of you are the same,” the daughter answered angrily. “I met George on the first of June and on the second he said to me, "Has your father got any money?”'

1. Carol was a girl.
2. She worked with her mother and father.
3. George worked near her office.
4. George never visited Carol's house.
5. Carol said to her mother, “I'm going to marry George Watts.”
6. Both Mr Yates and George said, “Has he got any money?”