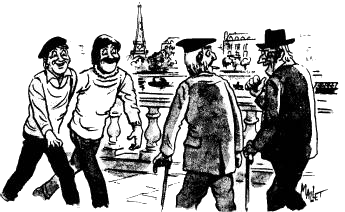 Two old gentlemen lived in a quiet street in Paris. They were friends and neighbours, and they often went for walks together in the streets when the weather was fine. Last Saturday they went for a walk at the side of the river. The sun shone, the weather was warm, there were a lot offIowers everywhere, and there were boats on the water.
The two men walked happily for half an hour, and then one ofthem said to the other, 'That's a very beautiful girl.'
'Where can you see a beautiful girl?' said the other. 'I can't see one anywhere. I can see two young men. They're walking towards us.'
'The girl's walking behind us,' said the first man quietly.
'But how can you see her then?' asked his friend.
The first man smiled and said, 'I can't see her, but I can see the young men's eyes.'