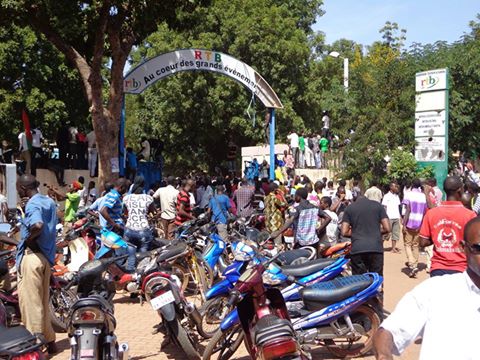 Burkina Faso's army cleared thousands of protesters from the capital and opened fire at state TV headquarters on Sunday, killing one person, as it sought to restore order after the resignation of President Blaise Compaore two days ago.

Compaore's 27 years in charge of the landlocked former French colony ended abruptly on Friday after two days of mass protests aimed at thwarting his bid to change the constitution to extend his rule.

The army then selected Lieutenant Colonel Isaac Zida as transitional leader, overriding an earlier claim by the army chief of staff.

But on Sunday there were signs of discontent with the appointment as thousands gathered in the capital, Ouagadougou, to demand a return to civilian rule, in line with the West African country's constitution.

Witnesses said prominent opposition leader Saran Sereme and an army general, along with a crowd of their supporters, headed to the RTB Television site to declare themselves in charge of the transition but were thwarted by the army. Sereme denied that on local news website Burkina 24, saying she was brought to the station by force.

Gunshots rang out at the station and the channel was taken off the air for hours. One person in the crowd was killed, an army spokesman said, calling for calm. "The army does not want power. But the anarchy needs to stop. Any violation will be punished with the utmost energy," said the spokesman.

Soon after, presidential guards moved in to prevent access to Ouagadougou's central Place de la Nation, the site of violent demonstrations against Compaore last week in which three people were killed and the parliament set ablaze.

Earlier, local people voiced outrage over what they saw as an attempt by the army to hijack their uprising and criticised the role of Zida, a large bespectacled man little known outside military circles whose trademark is a red beret.

One carried a placard saying "Zida Judas" while another read "Zida – get out of here".

"They are coming from Kossyam to enslave us," said protester Sanou Eric, referring to the country's presidential palace. "This is a coup d'etat. Zida has come out of nowhere."

"I am here to stop the army from stealing our victory," said another protester, Boubacar Sow.

The head of the United Nations Office for West Africa joined the United States and the African Union in rejecting the army's seizure of power but expressed cautious optimism about a return to civilian rule. Washington has also called for a power transfer to civilian authorities.

"We are hoping for a transition led by civilians in line with the constitution," Mohammed Ibn Chambas said.

"He [Zida] said he will reflect and try to work with the UN, African Union and the Economic Community of West African States, and to find an acceptable agreement which conforms to the constitution," said Chambas, adding that sanctions were a possibility if there was no progress.

Under Burkina Faso's constitution, the head of the National Assembly should take office if the president resigns, with a mandate to organise elections within 90 days. However, the army has dissolved the legislature and suspended the constitution.

Compaore, who seized power in the small, impoverished country in a 1987 coup, became a key ally of the United States and former colonial power France in operations against al-Qa'ida- linked groups in West Africa.

Locals blame Compaore for not doing more to tackle poverty in the nation of 17 million people by reinvesting government earnings from the gold and cotton sectors.

Diplomats say one reason why Compaore was so reluctant to leave power was his fear of prosecution on human rights charges, possibly linked to the death of left-wing revolutionary and former president Thomas Sankara, dubbed "Africa's Che Guevara".

Neighbouring Ivory Coast confirmed on Saturday that Compaore had arrived there with his family and entourage but did not specify where he was staying.

The events in Ouagadougou are also being carefully followed by a generation of long-serving African leaders in Benin, Congo Republic and Democratic Republic of Congo who are also approaching the constitutional limits of their terms in office.

The United States and other western countries have urged leaders to respect their constitutions, although analysts say that external pressure to democratise may be governed by strategic interests.

Washington can freeze military cooperation with Burkina Faso if it deems a coup has taken place.