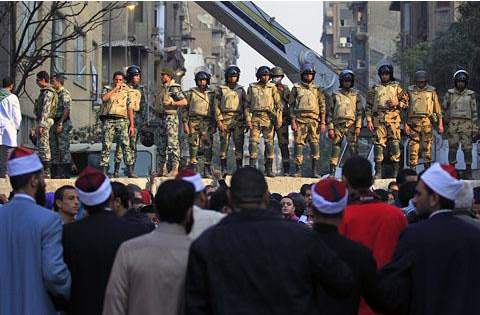 Egypt's military rulers have rejected a demand from protesters to immediately step down, saying the move would amount to a "betrayal" of the people's trust.

" We [Military Council]  will not leave the power according to  some demands  and empty slogans," said Major General Mukhtae el-Mallah. "If l leave power now, I would be a traitor of the people and history and it would be written in the history that the Military Council abandoned and betrayed its people."

Leaders of the Supreme Council of the Armed Forces announced the decision in a Thursday news conference. They also apologized for the deaths of at least 35 people in a series of clashes between security forces and demonstrators this week.

The apology was issued as a fragile truce took hold in Cairo's Tahrir Square, which had been a flashpoint for the violent skirmishes between police and protesters calling for the country's military rulers to step down immediately.

The unrest had continued in spite concessions that were announced earlier this week by Field Marshal Hussein Tantawi. The head of the Supreme Council of the Armed Forces pledged to speed the transition to civilian rule with presidential elections before July 2012.

Also, parliamentary elections are set to begin on Monday. Tantawi pledged the polls would go forward as planned.

Earlier Thursday, clashes erupted east of Cairo, in Ismailia, a city along Egypt's Suez Canal. Some protesters hurled Molotov cocktails at troops who moved through the streets in armored vehicles and tanks to the steady sound of gunfire.

In the coastal city of Alexandria late Wednesday, protesters set up barricades and hurled stones at police.  Others held hands in front of military buildings and chanted "freedom."

In another development, Egyptian authorities are releasing three American students who were arrested during a protest in Cairo this week.

Egyptian media reports said the Americans, who were students at the American University in Cairo, were detained along with other protesters while throwing petrol bombs at police.