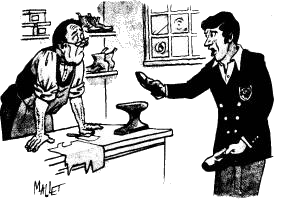 One of Harry's feet was bigger than the other. “I can never find boots and shoes for my feet,” he said to his friend Dick.
“Why don't you go to a shoemaker?” Dick said. “A good one can make you the right shoes.”
“I've never been to a shoemaker,” Harry said. “Aren't they very expensive?”
“No,” Dick said, “some of them aren't. There's a good one in our village, and he's quite cheap. Here's his address.” He wrote something on a piece of paper and gave it to Harry.
Harry went to the shoemaker in Dick's village a few days later, and the shoemaker made him some shoes.
Harry went to the shop again a week later and looked at the shoes. Then he said to the shoemaker angrily, “You're a silly man! I said, “Make one shoe bigger than the other,” but you've made one smaller than the other!”

B) Do this puzzle 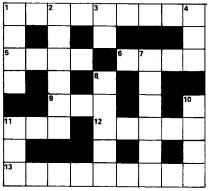