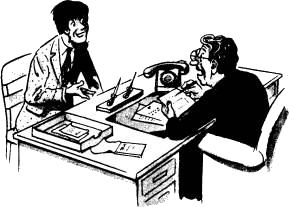 Joe Richards finished school when he was 18, and then his father said to him, 'You've passed your examinations now, Joe, and you got good marks in them. Now go and get some good work. They're looking for clever people at the bank in the town. The clerks there get quite a lot of money now.'
A few days later, Joe went to the bank and asked for work there. A man took him into a small room and gave him some questions on a piece of paper. Joe wrote his answers on the paper, and then he gave them to the man.
The man looked at them for a few minutes, and then he took a pen and said to Joe, 'Your birthday was on the 12th of June, Mr Richards?'
'Yes, sir,' Joe said.
'What year?' the man asked. 'Oh, every year, sir,' Joe said.

C) Write these. Write the correct words. Do not write the wrong ones.