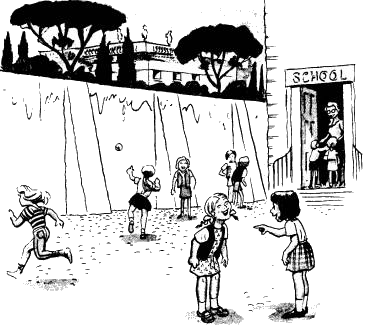 Mary was an English girl, but she lived in Rome. She was six years old. Last year her mother said to her, “You're six years old now, Mary, and you're going to begin going to a school here. You're going to like it very much, because it's a nice school.”
“Is it an English school?” Mary asked.
“Yes, it is,” her mother said.
Mary went to the school, and enjoyed her lessons. Her mother always took her to school in the morning and brought her home in the afternoon. Last Monday her mother went to the school at 4 o'clock, and Mary ran out of her class.
“We've got a new girl in our class today, Mummy,” she said. “She's six years old too, and she's very nice, but she isn't English. She's German.”
“Does she speak English?” Mary's mother asked.
“No, but she laughs in English,” Mary said happily.