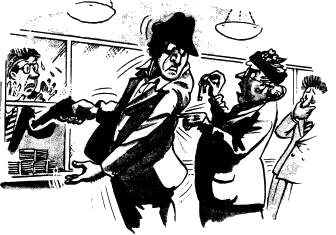 An old lady went out shopping last Tuesday. She came to a bank and saw a car near the door. A man got out of it and went into the bank. She looked into the car. The keys were in the lock.
The old lady took the keys and followed the man into the bank.
The man took a gun out of his pocket and said to the clerk, “Give me all the money!”
But the old lady did not see this. She went to the man, put the keys in his hand and said, “Young man, you're stupid! Never leave your keys in your car: someone's going to steal it!”
The man looked at the old woman for a few seconds. Then he looked at the clerk – and then he took his keys, ran out of the bank, got into his car and drove away quickly, without any money.


A) Which of these sentences are true (T) and which are false (F)? Write T or F.

1. An old lady went to the bank last Tuesday.
2. A man left his keys in the lock of his car.
3. The old lady gave the keys to the man.
4. Someone stole the man's car.
5. The bank clerk gave the man some money.
6. When the man went away, he did not take any money.

C) Opposites . Put one word in each empty place.