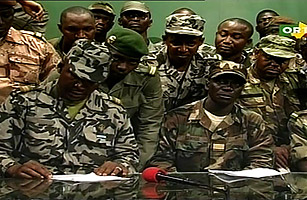 To the clatter of gunfire and under the cover of darkness, the President who ushered Mali into an unprecedented era of multiparty democracy fled the West African country's sleepy capital, Bamako, last night as an army mutiny rapidly escalated into a full-blown coup attempt. The renegade soldiers had claimed to have seized the country after storming the presidential palace during the night. But President Amadou Toumani Toure's reappearance at a nearby military cantonment, apparently at the head of a crack bodyguard of red-beret paratroopers, now leaves Mali on the brink of a civil war — apart from dealing with the thorny Tuareg rebellion that helped precipitate the military uprising. In less than 24 hours, one of Africa's most stable democracies has turned upside down.

Across Bamako, growing numbers of the military, gendarmerie and police switched sides, locking down the capital, firing sporadically and establishing roadblocks. Shops stayed shuttered, crowds stood uneasily on street corners, and old men in traditional robes lounged in deck chairs as they waited for news. "Pow-pow-pow," said Abdoulai, a taxi driver, mimicking gunfire as troops insouciantly loosed off rounds to cow the population. Gendarmes commandeered a silver station wagon; a soldier strolled casually down a half-deserted street, can of Coke in his hand; and a policeman riding pillion behind a driver on a moped flashed a V sign and shouted: "We've won." (MORE: On the Scene as Soldiers Target the Government)

In fact, the situation is a lot less certain than that. Around noon on Thursday, news emerged that Toure had successfully slipped past the renegade assault on the presidential palace, which bestrides a limestone cliff overlooking the center of Bamako, and was regrouping at Kati, the barracks where the mutiny began Wednesday morning. He is, however, without several key senior government members who are under lock and key. Meanwhile, mutinies continue to take place across the country. Former colonial power France, which retains close links to Mali, said it was suspending military assistance and called for the restoration of the constitution, which the mutineers suspended overnight. The U.S. and the European Union echoed that call, and U.N. Secretary-General Ban Ki-moon called for grievances to be settled democratically. The African Union said it was "deeply concerned by the reprehensible acts currently being perpetrated by some elements of the Malian army."

Situated in the heart of West Africa, Mali is deemed a key ally by Western powers, who will want to see Toure restored to power as fast as possible, particularly because terrorist groups are spreading rapidly in the region, and the Sahara is awash with weaponry looted from Libya. The country's northern desert is a thoroughfare for arms smugglers, a safe haven for al-Qaeda's regional franchise and a lucrative route for cocaine traffickers headed north to the markets of Europe. With an apparent standoff looming, there is every prospect of security deteriorating before it gets better. (PHOTOS: Made in Mali: Pictures of the Dogon People)

After Wednesday's violence, the first confirmation that a coup was indeed under way came in the small hours of Thursday when the leaders of the uprising appeared on state television, announcing their intention to depose Toure. Styling themselves the National Committee for the Return of Democracy and the Restoration of the State, they denounced the President's incompetence and promised to "hand power back to a democratically elected President as soon as the country is reunified and its integrity is no longer threatened," according to Lieutenant Amadou Konare, the group's spokesman. The TV appearance also provided the first glimpse of the leader of the coup, a little-known officer named Captain Amadou Sanogo, who is thought to be an instructor at Mali's main military garrison.

Although Toure's stewardship of Mali has seen the country blossom into a beacon of democracy on a continent that knows precious little of it, entrenched poverty and the 63-year-old former paratrooper's perceived mishandling of a powerful insurgency led by ethnic Tuareg separatists in northern Mali have fomented a powerful sense of discontent in recent months, especially within the military. The Tuareg rebels have heaped humiliation after humiliation on government troops using a lightning brand of desert warfare that has seen them strike at multiple targets separated by hundreds of miles of desert and desolate scrubland. Highly motivated and equipped with box-fresh weaponry looted from the arsenals of Libya's late Colonel Muammar Gaddafi — including vehicle-mounted rocket launchers, antiaircraft guns and surface-to-air missiles — the Tuareg fighters have easily outmatched Mali's demoralized soldiers, who have had to rely on limited quantities of World War II matériel.

Compounding the setbacks has been Toure's failure to talk openly about the problems. After a massacre in the remote desert town of Aguel'hoc, in which 82 prisoners taken by the rebels are thought to have been summarily executed, families of the dead soldiers learned of the atrocity not from government sources but by word of mouth. "We have what people call the telephone Arabe — the national rumor service," explains Adam Thiam, a veteran Malian journalist in Bamako. "Herders, families of soldiers, that kind of thing ... it is a pattern that the government communicates only when the information is already known."

Toure's failure to issue a public pronouncement more than a day after the first outbreak of violence hardly diminishes the impression of a leader playing catch-up. Whether he can outmaneuver an uprising that seems to have caught him entirely off guard could well determine how much blood must be spilled before the coup is over.