Oscar Pistorius 'Fought non-stop' with Girlfriend on Night of Killing 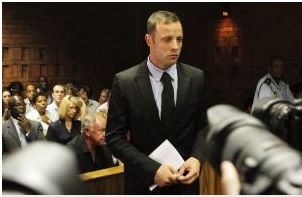 PRETORIA: "Blade Runner" Oscar Pistorius returned to court on Wednesday to hear explosive allegations that he fought "non-stop" with his slain girlfriend Reeva Steenkamp on the night of her killing.

With the South African sporting hero already facing a tough fight to win bail, the prosecution presented police evidence to flesh out the charge he deliberately murdered the cover girl on Valentine's Day.

Prosecutor Gerrie Nel told the court that an unnamed witness "heard talking that sounded like non-stop fighting from two to three in the morning" shortly before Steenkamp was found dead at Pistorius's Pretoria home last Thursday.

Detective Hilton Botha said 29-year-old Steenkamp was shot three times through the bathroom door, with wounds to her head, elbow and hip.

Botha said the shots were not fired straight at the toilet door, but rather "directly to the toilet, the basin itself."

"If you walk in directly and fire straight at the door you will miss the toilet," he said, suggesting Pistorius had been aiming.

Steenkamp, who had been going out with Pistorius since late last year, was declared dead shortly before 4:15 am on February 14 by medics and was found covered in towels and wearing white shorts and a black vest.

At Tuesday's hearing, the Olympic and Paralympic track star had tearfully denied premeditated murder, a charge that risks a life sentence.

Pistorius told the court he shot at Steenkamp through a locked bathroom door, mistakenly believing she was a burglar. "I had no intention to kill my girlfriend," he said.

With only the suspect and the victim in the house at the time of the killing, the state's case is expected to focus heavily on forensic evidence and witnesses who are alleged to have heard the couple argue.

Nel had argued on Tuesday that Pistorius deliberately fired four shots into the bathroom door after putting on his prosthetic legs, hitting a terrified Steenkamp three times and fatally wounding her.

"She could go nowhere," Nel said. "She locked the door for a purpose."

On Tuesday the double amputee track star broke down in tears repeatedly as his own words from his own affidavit filled the court: "We were deeply in love and couldn't be more happy.

"I am absolutely mortified by the events and the devastating loss of my beloved Reeva," he said in his first public comments on the killing.

As the court hearing proceeded Tuesday, Steenkamp was laid to rest at an emotional private ceremony at a crematorium in her hometown of Port Elizabeth.

Pistorius was an inspiration to millions when he became the first double amputee to compete against able-bodied athletes in the Olympics in London last year.

"Filled with horror and fear" that someone was in the bathroom, he said he felt "very vulnerable" because he did not have his prosthetic legs on.

He said he fired shots at the toilet door and shouted to his girlfriend to phone the police, but then realised it could have been Steenkamp in the bathroom.

After smashing the door with a cricket bat, Pistorius said "Reeva was slumped over but alive".

He said he kept a firearm under his bed at night because he had been a victim of violence and burglaries before and had received death threats.

Magistrate Desmond Nair said he could not rule out that there was some planning involved in the killing, which may be considered as a premeditated murder, setting a high bar for bail.

Pistorius, who off the track has had a rocky private life with stories of rash behaviour, beautiful women, guns and fast cars, has built up a powerful team of lawyers, medical specialists and public relations experts for his defence.

In 2009, Pistorius — who once admitted to a newspaper that he slept with a pistol, machine gun, cricket bat and baseball bat for fear of burglars — spent a night in jail after allegedly assaulting a 19-year-old woman at a party.

The Paralympian gold medallist became the first double amputee to run against able-bodied athletes at last year's Olympics in London on the carbon-fibre running blades that inspired his nickname.

But his career has been put on hold since the shooting, forcing him to cancel races in Australia, Brazil, Britain and the United States between March and May.

But two of his American sponsors, Nike and sunglasses maker Oakley, announced they were dropping Pistorius from their advertising campaigns, which have earned him millions of dollars in endorsements.