South African athlete ordered to hand over guns and passports, and pay £73,000 bond ahead of Reeva Steenkamp murder trial. 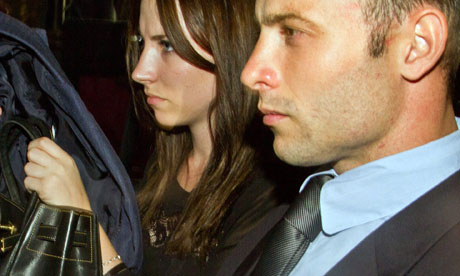 Oscar Pistorius has been has been released on bail at the end of a tense hearing which has gripped South Africa and the world.

There was no sign of joy from the Olympian and Paralympian who continued to sob and looked plunged into despair as the magistrate read out his decision on Friday.

But there were smiles of relief from Pistorius's family, who gathered in a circle to pray, and a shout of "yes!" from friends who leaped to their feet in the charged courtroom.

Magistrate Desmond Nair set the bail at 1m rand (£73,000) and said Pistorius must hand over his passports and also turn in any other guns he owns. The Paralympian's next court appearance was scheduled for 4 June.

The magistrate also ruled he could not return to his home, where the killing of Steenkamp took place.

Speaking on behalf of Pistorius's family, his uncle Arnold told reporters: "We are relieved of the fact that Oscar got bail today. But at the same time we are in mourning for the death of Reeva with her family.

"We are also grateful for the magistrate for coming to the conclusion and for our legal team that has delivered extremely professional and legal statements that led to the decision of giving bail today.

"As the family, we know Oscar's version of what happened that tragic night and we know that that is the truth and that will prevail in the coming court case."

Nair made the ruling after four days of arguments from prosecution and defence in Pistorius's bail hearing.

Nair said Pistorius's affidavit, in which he gave his version of the events of the shooting on morning of 14 February in a sworn statement, had helped his application for bail in Pretoria magistrate's court.

"That reaching out in the affidavit, the way that he did, placing it before the court," Nair said. "I come to the conclusion that the accused has made a case to be released on bail."

During the hearing, prosecutors said Pistorius, 26, committed premeditated murder when he fired four shots into a locked bathroom door, hitting his girlfriend cowering on the other side. Steenkamp, 29, sustained gunshot wounds to her head, hip and arm.

Pistorius' defence team argued the killing was a tragic mistake, saying the athlete had mistaken Steenkamp for an intruder. They said he was too famous to pose a flight risk and deserved bail to prepare for a case that has drawn worldwide attention.

"He can never go anywhere unnoticed," his lawyer Barry Roux told the court on Friday.

The athlete's lower legs were amputated in infancy but he races on carbon fibre blades.

Pistorius faces life in prison if convicted of premeditated murder.