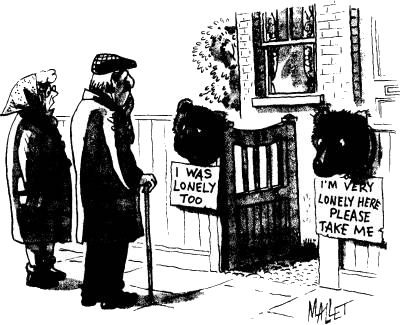 Whitebridge was a srnall village, and old people often came and lived there. Sorne of thern had a lot of old furniture, and they often did not want sorne of it, because they were in a smaller house now, so every Saturday rnorning they put it out, and other people came and looked at it, and sornetirnes they took it away because they wanted it.
Every Saturday, Mr and Mrs Morton put a very ugly old bear's head out at the side of their gate, but nobody wanted it. Then last Saturday, they wrote, Tm very lonely here. Please take me,' on a piece of paper and put it near the bear's head.
They went to the town, and came home in the evening. There were now two bears' heads in front of their house, and there was another piece of paper. It said, '1 was lonely too.'

1. White bridge was a big village.
2. A lot of old people lived in Whitebridge.
3. They put out their furniture every Sunday.
4. The bear's head was very ugly.
5. Nobody wanted the bear's head.
6. There were now three bears' heads.